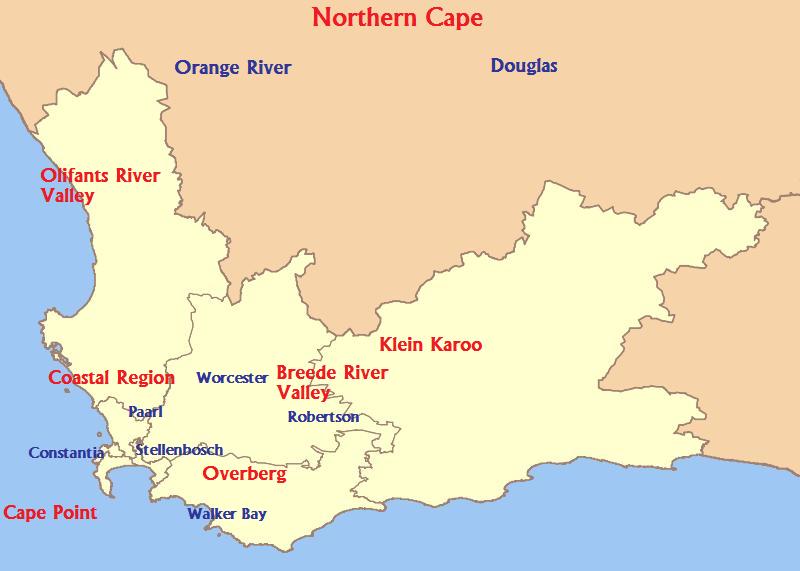 WO (Wine of Origin)

The Wine of Origin program defines the Regions and wine Distrits of South Africa.

Districts can contain Wards - quality areas with a distinctive type of soil or climate.

The Cape Town district is located on the Cape Peninsula.

The district grows a wide range of grapes with Sauvignon Blanc being particularly noted.

The Atlantic ocean on each side of the peninsula creates a cooling effect that contributes to a long ripening period.

The soil is composed mostly of sandstone with high concentrations of loam and granite.

Stellenbosh is located a few kilometer east of Cape Town.

The district has a winemaking tradition all since the 17th-century. The mountainous terrain, good rainfall, deep well-drained soils and diversity of terroirs make this a sought-after viticultural area.

The district produces the famous Cape wines from many noble grape varieties and is known for the quality of its blended reds.

Paarl is located a few kilometer north of Stellenbosch.

In Paarl, the grapes Cabernet Sauvignon, Pinotage, Shiraz, Chardonnay and Chenin Blanc have the best potentials.

Swartland is located in the Coastal Region just a few kilometer north-east of Cape Town.

is located a few kilometer north of Paarl.

Both red and white, award-winning wines, have emerged from Swartland.

Wellington is located in the Coastal Region a just few kilometer north-east of Cape Town.

In Paarl, the grapes Cabernet Sauvignon, Pinotage, Shiraz, Chardonnay and Chenin Blanc have the best potentials.

Walker Bay is famous for Chardonnay and Pinot Noir wines from Hemel-en-Aarde Valley.

The area is also known for quality Pinotage, Merlot, Shiraz, and Sauvignon Blanc.

The cool climate and the cooling winds from the ocean are the attributes of this district.

The soils are mainly weathered shales.

WO (Wine of Origin)

From 1973 the WO (Wine of Origin) program defines the wine regions of South Africa.

The WO was drafted after the French AOC (Appellation d'Origine Contrôlée) system, but consentrated about regions, not aboyt grape varieties and production methods.

A Ward is a Wine of Origin (WO) area more equivalent to the French AOC. It defines small areas (terroirs) with a distinctive soil type or climate.

In 1993, the Wine of Origin Scheme added Geographical Units:

* Only districts with registrated Wards are listed.