Gewürztraminer originates from Italy, but is best cultivated in Alsace where it produces one of the most Aromatic white wines in the world.

Gewürztraminer is known for its Exotic aroma explosion.

Many Fish dishes, especially with Butter, will break with Gewürztraminer.

Gewürztraminer pairs best with light meat dishes, and is excellent with spicy dishes and oriental cuisine.

A small Tulip Shaped glass is the best choice for off-dry white wines.

Remember to hold the glass by the stem! 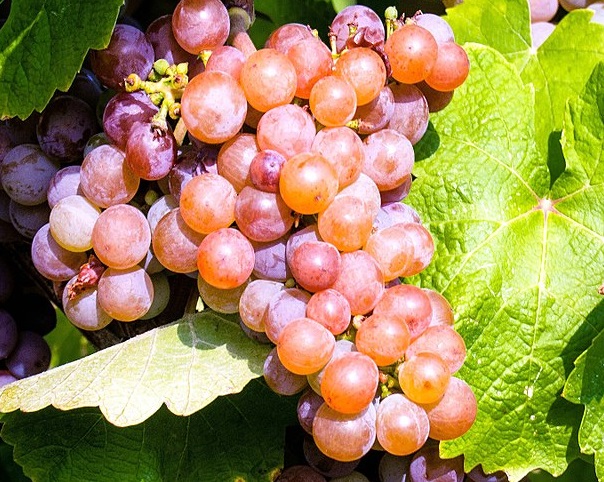 In France, Gewürztraminer thrives best in the cool climate of Alsace.

Gewürztraminer's origin is in Italy's North-East region of Alto Adige (South Tyrol) where the grape appears to be a cross between the Traminer grape and the Pinot family.

German Gewürztraminers are very different the French, with a relatively dry style.

In the New World

In the United States, Gewürtztraminer is mostly planted in California, Washington, Oregon, and Idaho.

Gewürztraminer from Australias coolest regions can be quality examples. Including Adelaide Hills, Eden Valley, Clare Valley, Yarra Valley, the Tasmania island, and some vineyard in the Australian Alps.

Gewurztraminer originates from Italy, but is more cultivated in Alsace where it produces one of the most distinctive and aromatic white wines in the world.

Gewürztraminer is a highly aromatic grape variety with a pink to red skin colour.

If you think of Sauvignon Blanc is aromatic, it is far behind Gewurztraminer in terms of flavor concentration. The word perfumed is usually not to take the mouth full.

Gewurztraminer originates from Italy, but is more cultivated in Alsace where it produces one of the most distinctive and aromatic white wines in the world.

Gewurztraminer without the right balance quickly becomes vulgar, oily aroma monsters that do their best to annihilate any possible combination of food and wine.

Gewurztraminers are often good in sweeter editions, made from overripe grapes, and in such a version it can be drunk for itself or combined with goose liver.

Gewurztraminer without the right balance can be vulgar, oily aroma monsters that do not combine food and wine.