Crémant wines are produced the same way as Champagne, but often with other grapes.

The primary grapes used in Crémant de Die are Clairette, Aligoté, and Muscat.

Crémant wines have much the same profile as Champagne:

The production method of Crémant is he same as Champagne, but often with other grapes.

n France, there are 8 Crémant appellations:

The Primary grapes used in Crémant de Bourgogne are the same as used in Champagne:
Pinot Noir and Chardonnay.

The primary grapes used in Crémant de Die are:
Clairette, Aligoté, and Muscat.

The primary grapes used in Crémant de Savoie are:
Jacquère, Altesse, and Chardonnay.

The second fermentation starts by adding yeast and sugar to the bottle, and after about 1 year, the bubbles are completely developed.

The legend tells the story that a Benedictine monk (Dom Pérignon 1639-1715) invented sparkling wine when he bottled a wine to early, but the oldest recorded sparkling wine is Blanquette de Limoux (1531).

The Die vineyards are located on the border between Côtes du Rhône North and Côtes du Rhône South. At altitudes are up to 700 metres, these are some of the highest in France.

Côtes du Rhône is an AOC (Appellation d'Origine Contrôlée) wine region in the Rhône Valley of France. There are two main regions: 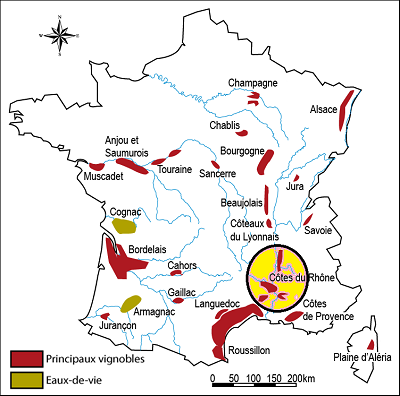 In the North, the main grape is Syrah.

The grapes grow on very steep slopes, and are manually picked in hillside trolleys, wich adds to the price.

In the South, the main grape is Grenache.

The area is famous for its GSM wines: A blend of Grenache, Syrah, and Mourvèdre.