Spanish Garnacha (Garnatxa in Catalan) is the same as French Grenache.


Garnacha wines should be paired with rich flavors.

They pair perfectly with rich Stews, Casserolle and Marinated Asian.

The Bordeaux glass is perfect for a bodied red wine.

The large size of the glass allows the bouquet to develop. It smooths out rough edges, plays down tannins, and allows the wines to achieve balance.

Grenache is one of the most widely planted red wine grapes in the world.

Grenache is called Garnacha in Spain and Cannonau in Italy.

The grape is said to be native of Aragón in Spain (near Navarra and Rioja).

From Spain it travelled to Languedoc-Roussillon in France, then to the Rhône Valley, and finally to Sardinia in Italy.

However, recent DNA analysis indicates that Grenache is native to Sardinia.

Today the grape is most famous for its importand role in the GSM wines from the Rhône Valley (Côtes du Rhône Villages and Châteauneuf-du-Pape).

Garnacha is the third most planted red grape variety in Spain (after Tempranillo and Bobal).

The most significant producing area is DO Campo de Borja, DO Sormontano and DO Calatayud, where you find the vast majority of old-vine Garnacha planted in Spain.

Influenced by the mountain chain of the Pyrenees, Aragon is a land of extremes with differents terroirs, elevations (from 400 to 800 m) and climates resulting in different expressions of Garnacha. 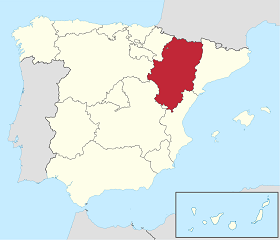 Aragón is located in northeastern Spain between Rioja and Catalunya.

The wines from Aragón are similar to those of Rioja but less expensive.

Aragón is best known for Garnacha and Cariñena.