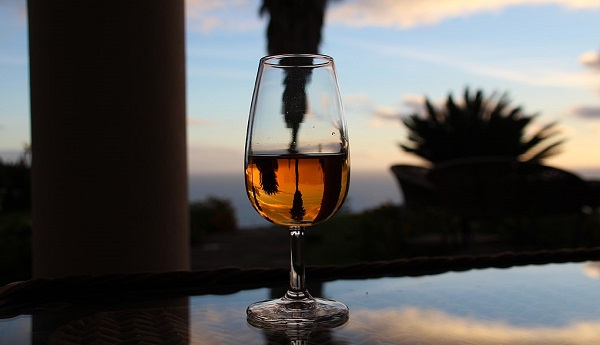 Madeira is a fortified wine from the Madeira Island of Portugal.

Sercial is dry with low sweetness and high acidity. It is a perfect aperitif and pairs well with fresh starters:

Verdelho is medium dry with a good balance between freshness and ripe flavors. It is suitable both as an aperitif and together with food:

Boal or Bual is matured, fruity, and full bodied with aromas of raisins. It is suitable for matching bold food:

Malvasia or Malmsey is full bodied with an intense character. It matches intense and spicy food:

Malvasia is also deliciuos on its own and with a cigar.

The volcanic island of Madeira was discovered by the Portuguese in 1419, and soon became a strategic port for sailing ships picking up fresh water and supplies on their route to India, East India, or the Americas.

The barrels were loaded onboard the visiting ships to provide refreshments to the sailors, and to act as ballast.

In this age of exploration, one of the biggest challenges was to prevent the wine from spoiling.

The solution: fortify the wine with brandy (neutral- non oaked- grape spirit), raising its alcohol content to 17-22% and making it stable. Same process used in Sherry and Porto wines.

The Legend of Madeira

Madeira wine was born by accident.

On a round trip to the East Indies, the refused barrels were returned to the producer who found out that the wine had improved.

The ship had passed 4 times the equator and the wine was exposed to tropical heat, intense movement and oxidation.

How Madeira is made Today

Estufagem is a heating process that transforms normal wine into fortified wine through rapid aging.

The wine is heated to high temperatures and exposed to air to oxidize.

The Island of Madeira

In Portuguese, Madeira means "wood" for the sub-tropical forests that once covered the islands. In fact Madeira is an archipelago composed of 4 islands, 590 km off the coast of Morocco. Only 2 are inhabited: Madeira and Porto Santo.

The total surface is 741 km2 of which the vineyards occupy 490 hectares.

Many American presidents including George Washington, Benjamin Franklin and Thomas Jefferson were fond of this sweet wine that soon became "America`s drink".

The signing of the Declaration of Indipendence by the Founding Fathers was toasted with Madeira wine.