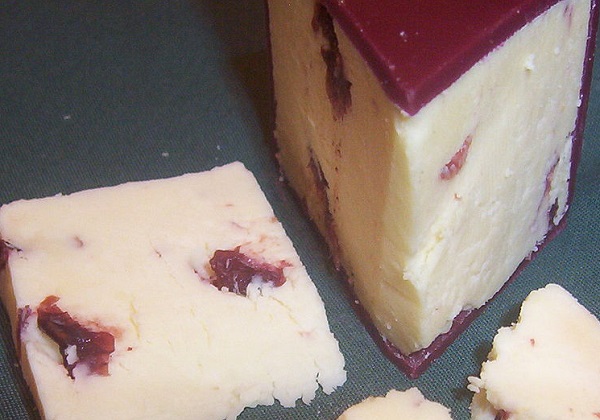 Wensleydale with Cranberries is a creamy and crumbly cheese originally from North Yorkshire, England.

About Wensleydale with Cranberries

Wensleydale with Cranberries is a a hand-made Yorkshire cheese sold fresh and young at only three weeks old.

The taste is mild, slightly sweet and tart due to the cranberries, some honey tones.

The texture is creamy and crumbly.

This cheese is a best seller during the Thanksgiving and Christmas holidays and the wintertime in general.

The Yorkshire Wensleydale’s history goes back to the early Middle Ages (1150) when French Cistercian monks started producing their own cheese as they settled in Wensleydale.

Back then the monks used sheep’s milk.

It is said that they were trying to recreate Roquefort but ended up with a drier, crumbly cheese.

In the 14th century, cow’s milk was used and the taste of the cheese began to change.

In 1536, Henry VIII of England orders the dissolution of monasteries and the Refornation of the Church.

To save the tradition the French Cistercian monks passed on the cheese-making techniques to the farmer's wives, who produced a blue version.

During World War II, and for nearly a decade after, most milk in the country was used to make "Government Cheddar", as part of the war economy and rationing politics.

Today the cheese is produced with pasteurised cow's milk with some sheep's milk to add flavor.

Make it a habit to eat and drink local. Expand your skills to understand the passion that wine communicates. Explore the range of possibilities a grape can express through culture, terroir, and climate.