This picture taken in Southern Sicily shows that amphoras are still used today for winemaking.

An amphora is a container made of clay used to transport and storage food and wine.

Amphora solves a lot of problems:

Probably invented by the Egyptians and adopted by the Romans.

Easy to load on board ships and transport all over the Mediterranean Sea or along rivers.

The shape: smart and functional, reminding of today´s bottle.

The top: covered and sealed with wax or resin, like today´s cork.

The bottom: allowes the sediment (mother) to collect.

Celts invented the wooden barrel and Romans adopted it.

The discovery of wooden barrels signs the end of an era.

Barrels are lighter, stronger, easier to transport, easy to produce thanks to plenty of woods.

Barrels are the best packaging solution for the thirsty Roman army. 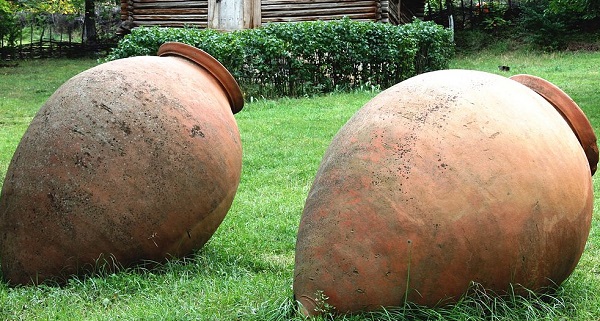 A Kvevri is a large amphora usually buried down in the ground to mantain constant cellar temperature.

In the picture above you see Kvevri buried all the way to the neck.

This will prevent big temperature fluctuations both in hot summers and cold winters.